unique projects
the walt disney project
In early 1999 Radial Engines, Ltd. was contacted by Walt Disney Imagineering in Glendale, California. It seems that Walt Disney Imagineering (WDI), which supplies all Disney theme parks with displays, needed a radial engine display to go to a park in Japan. We quoted them on the project (which included a mock-up engine, radial engine tools, a Beech 18 door, and aircraft tires) and were awarded the contract.

Shortly after this project was finished, we were again contacted by WDI. This time a new theme park was being built next to Disneyland in Anaheim and WDI was interested in having a Cessna 195 built up as the centerpiece for the aviation portion of that park. We responded with a quotation, they accepted, and we were off and running in the world of Mickey, Minnie, and Cessna 195 mock-ups. 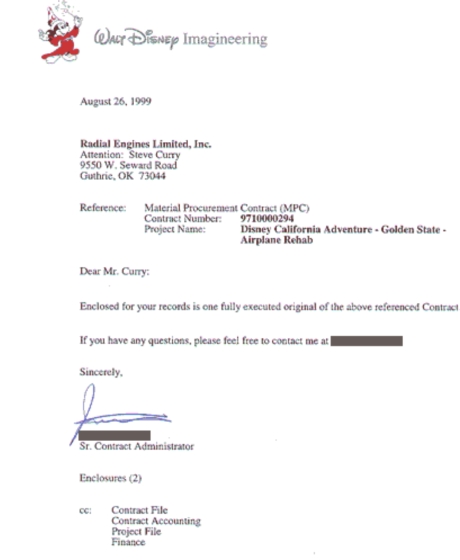 In order to meet WDI's requirements that the aircraft have no fuel, hydraulic fluids, or radium, and that it be readily approachable by the public (people friendly), much work was necessary.

The airframe was stripped of interior, paint, and instruments. All fuel cells, fuel lines, and brake lines were removed. A beautiful instrument panel was built of overhauled-looking (but completely unserviceable) instruments. We built a dummy Jacobs engine which was detailed in every way like one of our overhauls, but weighed 233 pounds less (we must have left something out!) All trailing edges of wings, ailerons, elevator, and rudder were covered with split PVC water pipe to prevent the diamond shape cut in the forehead that comes from walking into a Cessna wing. The interior of the outer skin was covered with two inches of spray foam insulation to prevent oil canning and dents (caused by park patrons pressing against the airframe). New interior upholstery and windshield were installed and the airframe was painted with silver Imron. A little more than a year after its arrival at Radial Engines, Ltd., the completed airplane was ready to travel to its Southern California home.

Once in California, the WDI artists added exterior stripes and "aged" the interior with airbrushes. In November of 2000, two Radial Engines, Ltd. employees went to Anaheim to assemble the airplane and give it its final touches.
The Cessna 195 can now be seen at the Disney California Adventure theme park which opened Feb 8, 2001.