Shop talk and tips
Over our 30 plus years in business, we have learned a thing or two about round engines, and this section gives us an opportunity to pass on some of the collected experience, ideas and technical expertise of our team and the many owners and enthusiasts that we have had the pleasure of working with and talking to at fly-ins through the years. We welcome your comments and feedback on any area of classic aviation and may choose to include ideas or experiences that may benefit others.
Click to browse through the following:
helpful links
frequently asked questions
Q: Does using Marvel Mystery Oil in the Fuel accomplish anything?
A: Many of our customers have experienced excellent results with Marvel Mystery Oil in their engines. At the temperatures found in the combustion chamber of a cylinder, MM oil will be vaporized. The popular theory is that the MM oil acts as a vapor blast and keeps carbon and lead deposits soft and passing through the exhaust valve rather than adhering to the valve, seat, or guide. For a more thorough discussion of this topic, take a look at the PiperCub Forum article.
Q: Why does a radial engine have an odd number of cylinders?
A: Radials are built with an odd number of cylinders to give a better firing order and corresponding smoothness with lack of vibration. The accompanying illustration shows the firing order and cylinder numbering sequence for a typical 9 cylinder radial. You will notice that every other cylinder fires in order and that at the end of two compression stroke revolutions, the pattern repeats itself. 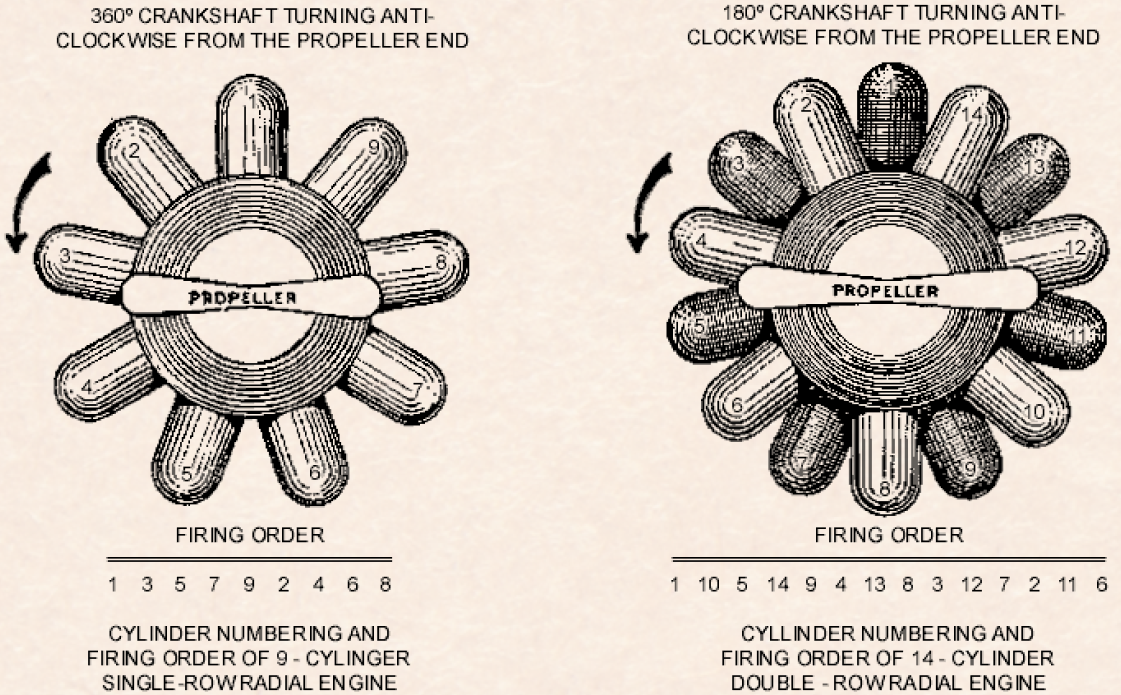 Q: How do the pistons drive the crankshaft in a radial engine?
A: A picture is worth a thousand words, so the following illustrations should be worth at least three thousand words. 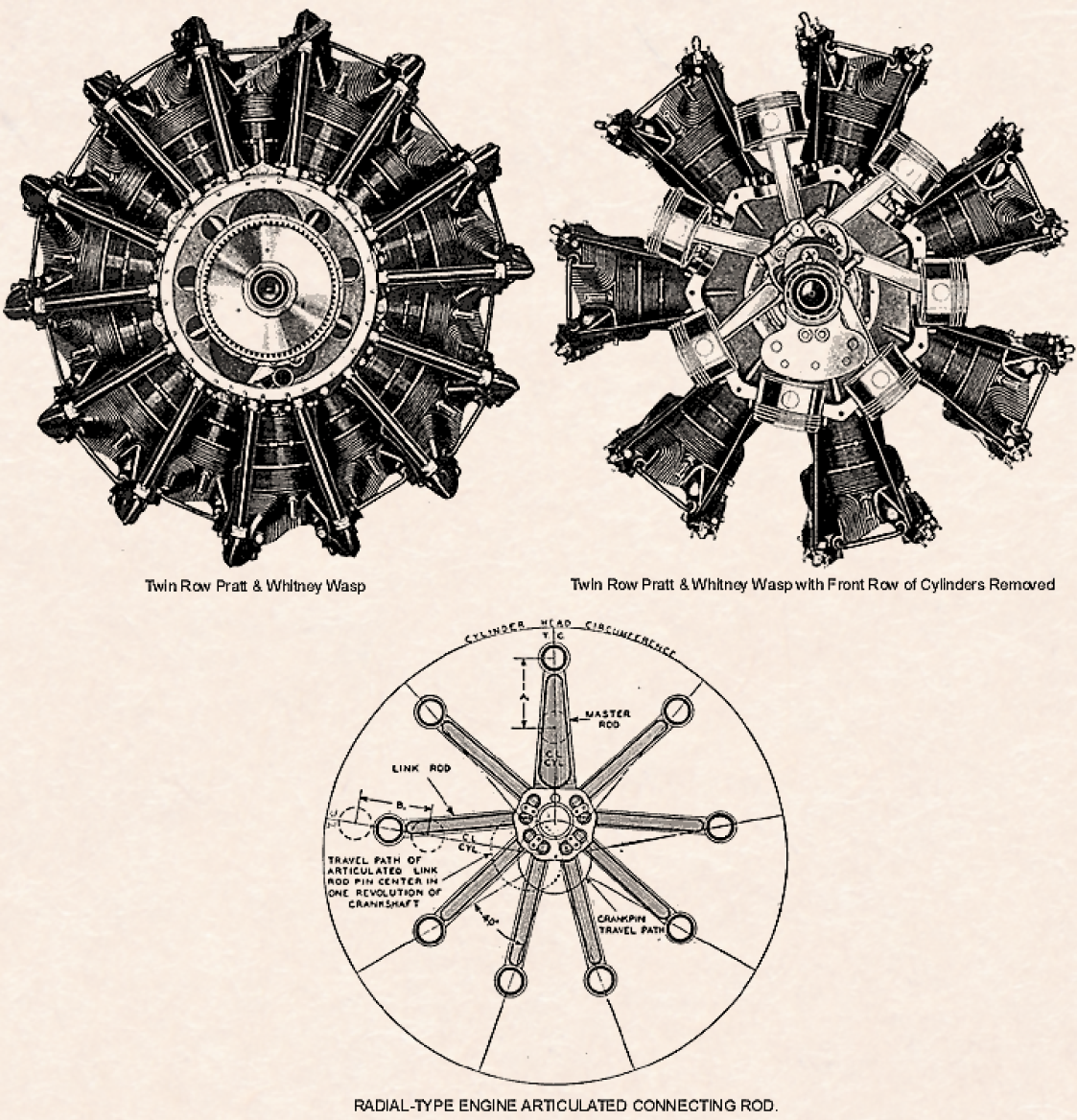 Q: What are my options as far as cylinder bores are concerned - chrome, steel, etc.?
A: This question must be answered on an engine model by model basis. All W670 Continental and R680 Lycoming engines originally utilized steel bore cylinders. Steel cylinders are still an option for these engines, though many operators are switching to some type of chrome cylinders to avoid the rust problems inherent with steel cylinders. During WWII when these engines averaged several hours per week, rust was not a problem, but today's operator might only average 25 or 50 hours per year. In this case it is not unusual to see rust form on the cylinder walls with a resultant loss of compression and increase in oil consumption. Steel cylinders do have a strong advantage in that the cast iron piston rings readily seat into steel bores.

As to chrome bore cylinders, there are basically three options: Channelchrome or one of two newer chrome processes (Nuchrome or Cermichrome). Channel-chrome, developed around WWII, is a hard chrome process, which has a cracked appearance (looks like a dry lake bed). Oil is free to travel through these channels (hence the name Channelchrome). Channelchrome wears very well, much better than steel, and does not allow corrosion. The down side with Channelchrome is that it often takes significantly longer to seat the rings into the slick chrome surface, and even then the oil consumption may not be as good as with steel. Nuchrome and Cermichrome, both newer and similar processes, use the hard chrome surface into which are impregnated silicon carbide particles (similar to fine sand paper). In the first few hours of operation, the rings are quickly seated by the silicon carbide and the silicon carbide is worn away by the rings. Oil consumption is typically better with the newer chrome processes and may even surpass steel. Both the newer processes appear evenly gray (similar to steel) and neither has the cracked appearance of Channelchrome.

All Jacobs L6, L4, and early R755-A2 engines originally used steel cylinders. The later R755-A2 and all R755-B2 engines require chrome cylinders.
Q: What is a good break-in procedure for a newly overhauled engine?
A. The following is a procedure that works well, though it certainly is not the only way to break an engine in.

ENGINE BREAK IN PROCEDURE STEEL, CHROME, OR NUCHROME CYLINDERS:
Q: I understand that some parts from the W670 tank engine are usable on the aircraft engine. Which ones?
A. Click here for a letter, which the FAA circulated to answer that question.
Q: Do I always need to pull my engine through before start up?
A:  Only if you want to avoid liquid locks. By gravity oil is drawn into the lower cylinders. If the oil level in the combustion chamber is so great that the piston contacts it, something is going to give, and it will not be the oil. Pulling the engine backwards will often clear the combustion chamber of oil, but will only transfer the oil to the intake pipe where it can again be drawn into the combustion chamber and cause a liquid lock. If, as you pull the engine through, a liquid lock is suspected, the only safe recourse is to remove the lower front spark plugs and drain whatever oil if found there. It is a small price to pay for getting to fly behind a radial engine.For more on this topic click here for article by Steve Curry.
Q: What is the clean kit?
A: With reference to the question about liquid locks, the clean kit is a product that increases the oil capacity of the existing sump on the Jacobs engine and decreases the chances of a liquid lock (not to mention wet start ups). The kit is available from The 195 Factory, 164 Hart Rd, West Glenville, NY 12010 – 518.882.6392 – service@the195factory.com
Q: How important is it to retorque cylinder base nuts and readjust the valves on a radial engine?
A: Readjusting valves is very important. After an overhaul as the valves seat in, the adjustment will change (usually the valve tightens). If the valve lash reaches "0", then the valve will be held open all the time, with a resultant loss in compression and eventually a burned valve. We recommend readjusting the valves at the first 25 hours after overhaul (we adjust them before and after the test run) and every one hundred hours thereafter.

Retorquing cylinder base nuts is an important operation that is often overlooked. See "Maintaining the Jacobs Engine - Retorquing nuts". This article speaks specifically to the Jacobs engine, but this information is generally applicable to the Lycoming and Continental radials as well.
Q: Is it possible to fuel inject these small radials?
A. Radial Engines, Ltd. currently holds the STC to fuel inject the Jacobs R755A2/B2 on the Cessna 195 and WACO YMF5. Click here for details. We are continuing the work to gain approval for STCs on many other airframe and radial engine combinations. Keep watch on this site for news as this technology expands. None of these engines were originally fuel injected, although attempts were for decades prior to REL achieving the Jacobs STC. We expect to produce fuel injected versions of all engines we rebuild in the coming months and years.
radial engines
Engine OverhaulsParts CatalogFuel InjectionGalleryShop Talk, FAQ, & Tips
contact
Radial Engines, LTD
11701 W. Forrest Hills Rd.
Guthrie, Oklahoma 73044